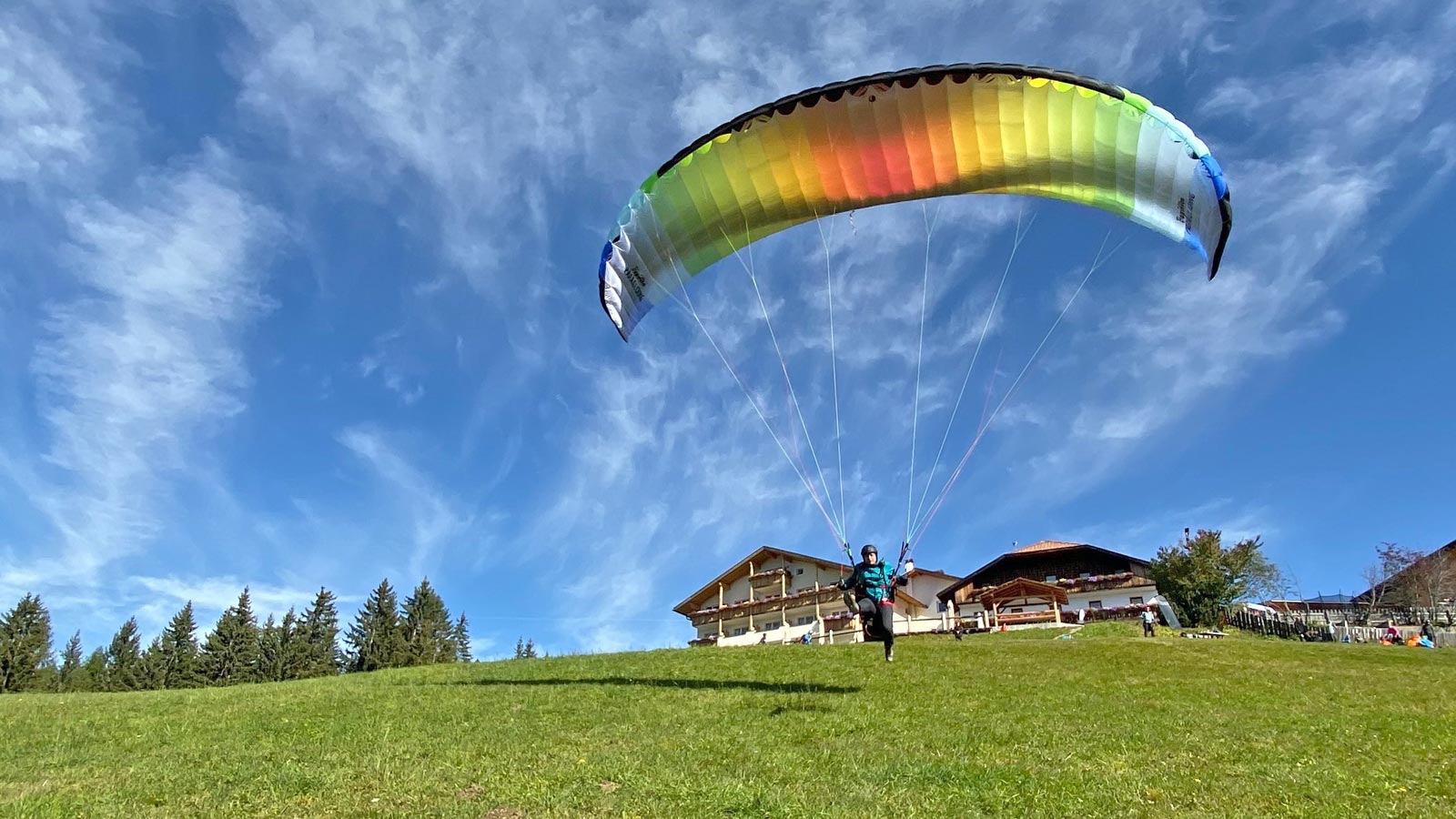 Your reliable companion – from the beginning!

The Bodyguard 7 arise of decades of experience from the training of countless student pilots, which has perfected the wing even further.

This high-end A glider combines all features that allows you a maximum safety and a successful entry into the paragliding sport. Pleasant handling, a certain amount of dynamics but at the same time soft reactions in case of turbulence characterize the wing and will increase your confidence.

With its great plus in passive safety and good performance, the Bodyguard 7 guarantees you fun with all your adventures and hooks you fast in this passion. The Bodyguard 7 impresses with its round, sporty handling and at the same time high passive safety, so that you feel comfortable in any situation under your wing.

A clear line concept for easy sorting, as well as color markings and icons on the risers according to the Pilot-Assistant-Concept (PAS) simplify handling on the ground. Whether launching forward or backward, with little or no wind – when you start, the simple and continuous rise of the glider without tendency to overshoot, brings you relaxed in the air.

The direct handling and the round conversion of the control impulses, simplify the centering in the thermals as well as the learning of flight maneuvers and helps you to increase your flying technique. Even in turbulence the Bodyguard 7 gives a fair feedback and supports you easily.

With the latest technology, such as an effectively pre-formed leading edge, optimized wing pre-tensioning, mini ribs at the trailing edge and an efficient distribution of crossports for the inner pressure of the glider, improving the safety of the wing.

The Bodyguard 7 is your perfect all-round companion – whether during your training or during your first cross-country flights and enjoyable thermal lessons – he guides you safely through the air.

This confirms the award of the Bodyguard 7 with the DHV Safety Class 2, the currently highest safety level. The wing responses to rolling or dynamic situations with moderate height loss and very good handling.

Clearly marked bands with colors and icons based on the Pilot Assistants Concept (PAS) help to quickly find the correct line level for each maneuver.

3D shaping (3DS) of the cells, optimised wing pretension and Mini Ribs (MRB) at the trailing edge improve profile fidelity and airflow and have a stabilising effect on flight behaviour.

Thanks to the Brake Gathering System (BGS) on the trailing edge, the wing precisely converts control impulses and enables fine centring in thermals.

High Definition Profile (HDP) means: plastic rods run along the top of the profile, covering between 45 and 80% of the surface depth.

The innovative Automatic Flight Stabilisation (AFS) system intervenes when the air becomes turbulent. This technique is made possible by a precise calculation of the sail pre-tension at the wingtip.

The High Pressure Crossport Design (HPCD) allows good air distribution and pressure equalization within the wing and increases the folding stability of the cap.

MiniriMiniribs (MRB) and the Brake Gathering System (BGS) transmit control impulses to the wing with high efficiency and precision.

Thanks to the Extended Aeration System (EAS), the additional openings in the upper sail are closed during normal inflow. This is ensured by the internal pressure and the air vortex created by the inflowing air in the front area of the wing profile.

Andreas Schubert about the Bodyguard 7

The BODYGUARD 7 is the latest paraglider development in the upper class EN-A segment. The balanced flight and material characteristics distinguish it as a particularly well-suited companion from the first high-altitude flights to thermal flying and the first cross-country experiences.

Thanks to the lightweight cloth, its forward and reverse launch characteristics are definitely among the best and easiest in paragliding. At the same time, the profile nose and upper sail are robust with the use of the 5g/sqm heavier cloth and are even well suited for training use or frequent ground handling.

Glide performance from the B-class

In the air, the BODYGUARD 7 impresses with a glide that until 2015 still marked the B class. In thermals it turns flat, with very little sink and without diving away; this is also confirmed by the test pilots, who were always immediately the highest in the flight areas during the test phase.

The reason for this is the very low sink rate, which, thanks to the average 2 square metres larger surface area with a reduction of 0.1m/s, represents an improvement in climb performance of around 10% compared to most other canopies of almost all classes.

Its take-off speed is low, which is an enormous advantage in alpine terrain with little downwind. It also makes landing much easier, especially at the beginning. The trim speed of 33-36 km/h – depending on the hang-in weight – is sufficiently high to be able to fly safely against the wind in a serious meteorological environment.

When the wind picks up or for beginners in cross-country flying, the speed can be increased to 44 to 48 km/h, depending on the load, by using the speed system.

The B-Stall is reliable and, contrary to its predecessors Bodyguard 1 to 3, easy to fly. The glider tilts slightly backwards in the initiation phase, absorbs sink and remains very stable even when operated asymmetrically. Due to its larger surface area, the sink rate of 10m/s is somewhat lower than that of other models. The rejection or the start-up take place immediately without delay. The most common descent aid is the ear-attachment.

The outer lines are very well marked. They allow an easy initiation for a calm flight condition with a higher sink rate, which can be increased from 2.5 m/s to 3.5m/s by means of an accelerator. The rejection takes place independently immediately. I have only flown the spiral dive a couple of times with the BODYGUARD 7. The glider has comparatively longer lines, which leads to somewhat higher centrifugal forces in the manoeuvre.

Therefore, this manoeuvre should only be done with training. With sink rates above 10m/s, an active flying style is required for the recovery, so that it does not come to an after-rotation. However, active flying is anyway the basis for flying or experiencing spirals, which are considered to be the most attractive descent aid.

In the upper weight range the glider becomes very agile, which also means increased dynamics in all extraordinary flight conditions due to the lower roll damping. Talented pilots can experience their first stalls, flightbacks, helis and sats on the BODYGUARD 7 in particular. I had a lot of fun because all the manoeuvres are slower and can therefore still be experienced by older test pilots.

Extreme flight conditions are also extremely rare and can practically only occur after weather-related overload. Basically, the profile of the canopy is considered to be one of the most collapse-stable and failure-resistant in paraglider development to date (cf. DHV Safetyclass Emotion 3, (same profile)).

Note: All flight manoeuvres shown in this video are deliberately provoked by the pilot to demonstrate the extreme flight behaviour of the glider.

If a collapse did occur, the glider reacted with generally low dynamics in countless tests. On collapses, it turns away between 90 (only on wing-deep collapses up to a maximum of 180°), shoots forward moderately and, thanks to the only low sink rate, got my personal top mark in the overall impression for the lower to medium weight range.

Even easier collapse behaviour was only observed with canopies with lower performance data in all paragliders known to me (cf. flight instructor practical tests Papillon). Frontal collapses are followed by immediate reopening after a moderate tilt. All in all, even with these collapses there is comparatively little dynamic.

The glider is the first recommendation for the middle of our customer profile due to our need for safety and our claim to promise the most balanced* flight characteristics.

Cookie-Einstellungen
We use cookies to optimize our website and our service.
Manage options Manage services Manage vendors Read more about these purposes
Preferences
{title} {title} {title}